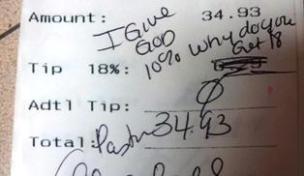 One of the latest scrapes between humanity and social media (I am assuming Reddit is social media) is the instance in which an employee at Applebee’s is stiffed by a christian clergy-person, who notes on her check that she apparently receives better service from her deity, and that she will leave no tip, based on the party of 8 or more: “I give god 10% why do you get 18,” reads the now infamous receipt, which is signed with the clergy’s name- but then it looks as if she added “Pastor”- because who can resist the opportunity to advertise one’s ministry?

An Applebee’s employee learns of this (not the server, but another employee) and posts a photo of the receipt on Reddit. If you enjoy reading christian vs. atheist comment battles, head on over there. If not, don’t- that’s all that’s there now.

So people do some detective work and identify the clergy and the church, so it gets back to this clergy person that her 0% tip idea is not popular on the internet. Outraged, she declares to Applebee’s that she wants everyone fired. The server who posts the receipt is indeed fired.

The controversy points are many. Should clergy have acted like that toward a restaurant server? What if it were a customer without a ministry rank? When someone wrongs you, is social media the equivalent to the water cooler? Where does discretionary privacy begin and end? What are the implied bounds of confidentiality in a world that is more on-camera and data-searchable than ever before?

One thing is clear- as irrational as social media openness may seem to bystanders, the volume of sensitive material that goes up on social media daily is astounding- and it threatens those who like to bully people in the dark. Their expectations for privacy involve the ability to be mean to others without being held accountable. On the other hand, previous generations’ “among friends” discussions, where three or four people used unspoken, unregulated discretion in what they spread or did not spread, are today amplified by the internet.

One familiar theme is obvious to me: the message that social media holds today is this: “if you mess with me, everyone’s going to know.” You can be arrested for videotaping the police– they know their decisions can be reviewed on the internet by the court of public opinion. The question we need to ask is whether the specter of high-information sharing will lead to systemic change in how people behave toward one another, or conversely, will it redefine rude behavior as trivial?

There are two take-aways from this: first, keeping one’s job and career involves upholding the protocols expected of the profession and the workplace. If that is a priority, vigilance and discretion in social networking is recommended. Second, simply being nice and acting toward others with integrity is typically the best policy in life- nothing embarrassing about that, when it shows up online. It’s as if the digital age exemplifies a karmic system, where ugly behavior begets ugly responses. I want to be on the good side of karma.

Welcome to my journal. I am interested in places where counseling, health, current events, and public policy intersect- particularly things on the cutting edge.

Error: Twitter did not respond. Please wait a few minutes and refresh this page.